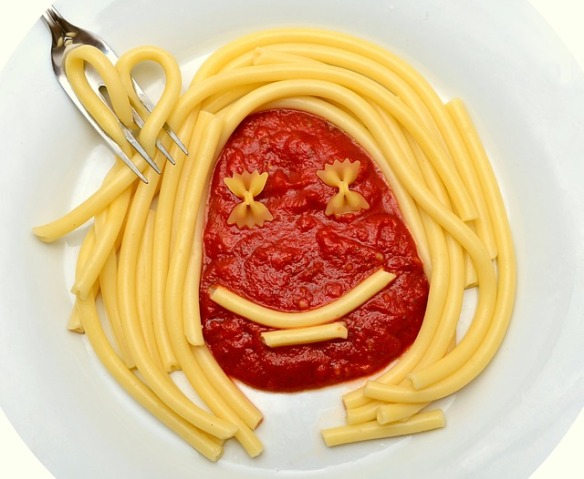 Pasta caricatures of your dinner guests; out before it was ever in.

“…Is there anything you don’t eat?..” That’s the question I always ask any first-time guests to my home. “…Well…,” she texted back…“I’m paleo, gluten-free, vegan, pesca-centric, tropical, raw, keto and equatorial…” I stood there, dumbfounded, when I received a second text from her. “…Only kidding, Sunshine, I eat everything!..”

My jokester friend made me realize something. When was it that I began to lose control of my culinary smarts? I always prided myself as a foodie, able to converse on all the cutting-edge trends, but lately, it seems as if I can’t keep up.

All along, I thought SCOBY was a cartoon character. The rubbery, brown amoeba like creature with bulging eyes and a mischievous grin would dart in and out of adventures in his homeland of Kombucha. Leave it to some millennials on line at Starbucks who took pity on me and explained that SCOBY is an acronym for “symbiotic culture of bacteria and yeast” which forms on top of kombucha tea, a fermented drink made of tea, sugar, bacteria and yeast. Known for its health benefits, it’s been around for thousands of years. It’s rich in probiotics and is said to actually fight off some diseases.

I was caught off guard when I called for a reservation at a favorite restaurant and was told they were closed for a special sold out event. Their guests would be introduced to dark dining. All around the world restaurants are turning off their lights in the hopes that the removal of vision will enhance the other senses and increase gastronomic pleasure. At the end of the evening, night goggles off, I wonder if the waiters share stories of customers accidently eating off a neighbor’s plate, bending down to pick up a fallen napkin and realizing it’s not their lap they’ve placed it back on and navigating those crazy restroom runs.

Leave it to New Jersey to conjure up a union between unicorns and bagels. Purists everywhere are dumbfounded by The Bagel Nook’s introduction of the unicorn bagel, a blue, yellow and pink colored bagel served with cotton candy cream cheese, then dusted with unicorn sparkle dust. Speaking as a Texas resident, I shudder to think what the introduction of anything unicorn like might be in the Lone Star State. Picture thick porterhouse steaks sizzling on a large barbecue grill as flames shoot into the air. A Willie Nelson song plays softly in the background, cold beers have been passed around and it’s the kind of day to put your feet up (cowboy boots on) and relax. Are you going to be the one to suggest a sprinkle of unicorn sparkle dust on the rare hunks of beef? I rest my case.

Any way you slice it, food trends will always keep thrusting themselves into the limelight, hoping at the very least, for their 15 minutes of fame until they fade away. The Jell-O salad jiggled its way onto everyone’s table until sneaky cooks started hiding yesterday’s leftovers in it. Fondue warmed our hearts until double dippers gave us concern for germs. All we can do is open our mouths, bite the bullet and swallow hard; soon we’ll be on to yet another version of good taste.

4 thoughts on “Lost in Culinary Crazes”