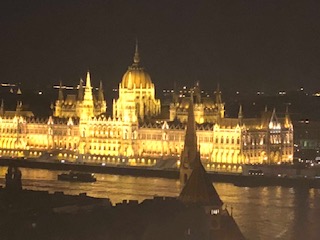 It was my idea to take the train from Vienna to Budapest. The ride was under three hours and I thought we might enjoy the scenery. As it turned out, I fell asleep (as I usually do in any moving vehicle) and had to rely on *Mr. Wiz and *Big A for the descriptions of the small towns and countryside that we passed. The train station is jam-packed, so it was comforting to see that little sign, with our last name on it, held by the driver that was to take us to our hotel.

In all the times I’ve stayed at Hilton hotels, I have never experienced one like this. It seems as if the staff stands at attention and clicks their heels to welcome us, with military precision. They operate together as a well-oiled machine, providing impeccable service throughout the Budapest Hilton. The subdued colors and stylish furnishings give it an elegant, yet contemporary feel.

Budapest is one of the largest cities in Europe and Hungary’s capital. Because of the considerable damage left behind after World War, the city is much more modern than Prague. It’s also more sprawling, less touristy and is known for its vibe. Budapest is actually made up of two cities, Buda and Pest, which are separated by the Chain Bridge that spans the Danube River.

With not a moment to spare, we set off to explore. Because the sights are not all within walking distance, we rely on the good old on/off tourist bus, so as not to miss anything. We pass on the funicular and decide to walk up the steep path to Castle Hill to admire the views. The third largest building in the world with over 600 rooms, the commanding presence of the Parliament building is even more impressive when it’s lit up and sparkles at night. We stroll the luxurious grounds of Buda Castle, a palace complex built in 1265. The Matthias Church, dating back to 1015, misleads us with its neo-Gothic exterior and its mystical, exotic interior. Heroes’ Square is impressive, with its stately statues honoring important Hungarian leaders. The Great Market Hall is bustling and we make sure to buy some of the city’s famous paprika to take home.

As we stroll along the Danube, we notice that people are quiet as they approach the Bronze Shoe Memorial. Between 1944 – 1945, many people (most of them Jewish) were murdered along these banks. Before being shot and having their bodies fall into the Danube to be swept away, they were forced to remove their valuable shoes, so as not to waste them. The assorted sizes and styles of shoes that have been bronzed are placed as if the person has just stepped out of them. Whether one shoe was in front of the other or one is on its side, you get the feeling of motion and of realism. It is such an emotional and moving tribute.

It’s worth the wait to eat at Mazel Tov.  The contemporary Israeli restaurant is housed in an old warehouse that looks abandoned on the outside and is one of the city’s classier ruin bars. Derelict buildings circa World War II have become a tourist attraction when transformed into bars and restaurants all over Budapest. When we take a minute to look up from our tahini, hummus, chicken shawarma and homemade, hot pita bread served in a paper bag, we notice the vines hanging from two stories up and the glass ceiling; very cool.

The Hilton recommends a restaurant down the street and we lunch on shrimp, duck pate and goulash soup along with Hungarian wine at the Baltazár Wine Bar. When we learn that two sister restaurants are nearby, our dinner decisions are made. Pierrot Restaurant is housed in a 13thcentury bakery. The black and white photos that line the walls and the pianist playing softly in the corner convey an old-world elegance. We share tastes of the duck in puff pastry, beef tenderloin, venison loin and are starting to appreciate Hungarian wines. By the time we arrive at the 21 Restaurant, Mr. Wiz is well versed on local wines and has an interesting conversation with the manager. Together, they choose a bottle to compliment the rack of lamb, crispy duck and chicken paprikash, which is accompanied by homemade spätzle.

We cannot leave Budapest without visiting Szimpla Kert, the first ruin bar and now known as one of the world’s most famous bars. Created in an abandoned warehouse in the Jewish Quarter, It’s hard to describe; think of a giant, dark junk shop that serves liquor (in a good way). The DJ is housed in a glass room, music is blaring and people from all walks of life (babies in strollers to a senior citizen tour group and everyone in between) are either sitting down (on bar stools, in an old bathtub fitted with benches or inside the body of a car) or strolling around to view what looks like a Fellini movie on steroids.

Is it the entire room filled with old televisions featuring psychedelic patterns on the screens, the wide-eyed doll heads glaring at me from the wall-to-wall shelves or the knight in armor standing next to the six-foot ceramic rabbit amid a collection of old typewriters dangling upside down from the ceiling that will give me nightmares this evening (in a good way)?

Instead, I fall asleep with visions of tomorrow’s last sumptuous buffet breakfast in the lovely hotel dining room, complete with castle views out every window followed by a morning of last minute sightseeing before saying goodbye to Buda and Pest and heading home.