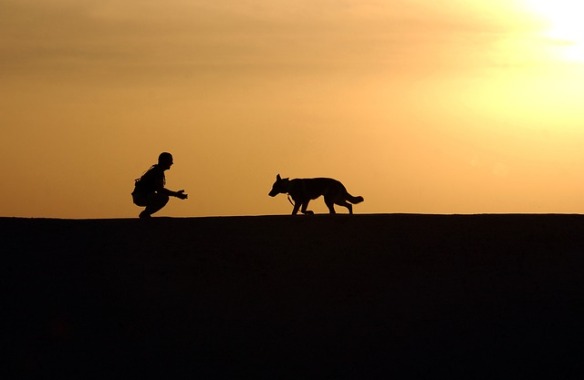 I wondered why she needed a service dog, but it’s not something you ask someone. On the Camino, dogs were a novelty. He was the star of the show, receiving so much attention. Head down and the ever-present cigarette between her fingers, she remained out of the spotlight, answering every question about him with as few words as possible. She was petite and cute, but there was a toughness about her that told you that this was someone you did not want to mess with. When she did look up, I noticed that she seldom smiled and her eyes were devoid of any sparkle. They were hauntingly dark and piercing, as if they held secrets that were not discussed in polite company.

We seemed to be on a similar pace and ran into each other almost daily. I made sure that I greeted her every day with a smile and a quick “Hola” or “Buenos Dias” so as not to interfere with her solitude. While others around her were sometimes talking and laughing together, she and her dog always walked alone. He was her best friend and the way they interacted brought a tear to my eye.

One morning, I noticed that the dog was walking right next to an older woman, rather than his master. Out of character for the girl, she asked the older woman if she was feeling all right. Without too much explanation, she briefly mentioned that her dog was able to sense low blood sugar in humans through his sense of smell. The woman brushed it off, thanked her and continued on.

When I saw her the next morning, I asked about the older woman after my usual morning greeting. I was surprised that she actually seemed to want to respond and spoke with more emotion in her voice than I had ever heard before. Luckily, the woman was staying at the same albergue (hostel) as she and her dog. As soon as the older woman sat down on her bed, she passed out. Realizing that the dog’s diagnosis was correct, the girl was able to get help for her immediately and, by dinner time, the woman was feeling better. Another example of how the Camino provides.

Our relationship reverted back to my daily one word acknowledgments until one evening the following week. I was sitting outside at a café, enjoying a glass of red wine and she asked if she could join me. Startled, I agreed and hoped that we would not suffer those long pauses of discomfort when conversation does not come naturally.

I can’t recall what actually happened next. I may have commented about the day’s terrain, but all I remember is that she started to speak. And when she did, the words came like an avalanche; spilling out of her so rapidly. It was as if they had filled her up, swelled to capacity and finally exploded. She hardly seemed to breathe as she told a captivating story of her life: the military, a college education, promotions, Iran, Iraq, Afghanistan, Post-Traumatic Stress Disorder (PTSD), an honorable discharge, her service dog, the Camino.

I was lost in her words, my mind racing to keep up with her story. It took all I had in me to not interrupt. I had so many questions, but this was her moment. What if digging deeper put her over the edge?

When she abruptly stopped speaking and took a deep breath, we just looked at each other for a moment. She looked different; her posture seemed less rigid, her expression was softer. I was unsure of what to say, but when the jovial group of pilgrims that I was to meet there joined us, she hurriedly said her goodbyes and she and her dog left.

A few days went by and I wondered why I had not run into her. I was glad to see her the following day, smiled and gave my usual greeting, but she did not smile back. “…I have to leave…” was all she said in a flat tone. She explained that the pads of her dog’s feet were scraped and bleeding and he couldn’t walk anymore. She had tried ointments, but nothing had worked. She knew he would stand by her side regardless and just keep going, but this was the right thing to do. She was confident they would return next year and pick up where they had left off.

She then put one finger on my arm and whispered “…Thank you, my friend…” I returned the one finger touch and replied softly “…Buen Camino…” It was the first thing that came to mind, but I meant it in the bigger sense. I had so much more I wanted to say, but at that particular moment, words did not seem appropriate. For her that small gesture of intimacy was at the same level as the “Heimlich Hugs” that my Spanish grandmother was famous for and I knew I would always cherish the fact that she chose me to share it with.

She and her dog were gone the next day. Unlike others you might meet and connect with along the Camino, we did not exchange contact information. I thought about her a lot. I wondered why I had been chosen to be the one to interact with her. In this brief relationship, who was the student and who was the teacher? Just as in the military, I questioned if the Camino was breaking me down and rebuilding me from the bottom up in order to make me a better person.

For days, I would hear pilgrims say out loud “…Hey, where’s the dog?..” and I would answer that they went home, each time hoping to myself that they would find a place in the world to call home and that that there would be another arm for her to put her one finger on.

2 thoughts on “The Camino, the Dog and the Girl”