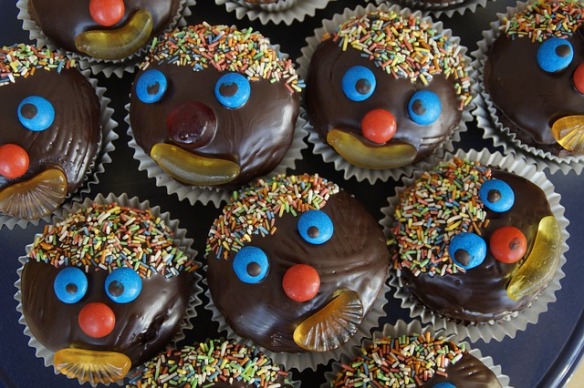 The loud crash startled us. By the time I lifted my eye mask off one eye, looked around, noticed nothing broken in my immediate area and tried to wake up, Mr. Wiz* had jumped up, figured out what had happened and already cleaned it up. Known for his supersonic hearing capabilities (he says it makes up for his poor eyesight), it seemed to me that he was already sitting up in bed, having heard the sound of a change in air velocity before the actual crash.

It was a freak accident. One of the pitchers from my collection that I have displayed along the top of the kitchen cabinets fell off the hidden, upside-down plastic container that I had it sitting on (to give it some height). This led to an abrupt change of display tactics, as all were removed from their precarious perches until we would be able to come up with a better plan. Better that then a major head injury caused by flying pottery. I should have known right then and there that my birthday was destined to be the stuff that humorous articles are made of.

No longer feeling that I needed to wear a bicycle helmet to do the dishes, I washed a bowl and instinctively turned on the garbage disposal. It was the loud grating sound that gave me that sick feeling in the pit of my stomach. I quickly shut it off, but the damage was done. I looked down and could see a twisted demitasse spoon lodged in its inner workings. When Mr. Wiz dashed over to survey the damage (damn, those ears!), I stood behind him and softly hummed “Happy Birthday To Me”, so as to try to diffuse the situation. He assured me that accidents happen, but was kind enough not to mention that they seem to happen to me at a disproportionate level. One quick call to a plumber and we were on our way.

The plan was to head over to Austin’s Lake Travis for the afternoon. I called JC* and told her we were on our way to pick her up. Mr. Wiz and I were singing to the car radio and just when we hit the high notes, we felt blasts of hot air coming out of the air conditioning vents. While I realize that covered wagons traversed Texas with not as much as a fan, nowadays when it’s summer in Austin, you need your AC. Our new destination was now the car dealership and soon after, we were able to secure a loaner car. On our way again, we both agreed that it was too late for our original plan.

We headed to JC’s to reconnoiter and come up with a plan B. Just as we were trying to decide what to do next, the deafening shrill of the building’s fire alarm sounded. From her terrace, we could see four fire engines pulling up. The alarms silenced and it turned out that we didn’t have to evacuate the building. A word to the wise: if you live in a high-rise and there is smoke in your apartment, remember to open your patio/terrace door and not the main door to your home. One of her neighbors with a breadcrumb filled toaster was probably feeling very embarrassed.

Our dinner reservation was in 20 minutes. We were disappointed that JC was feeling a bit under the weather and would not be joining us. We had originally brought clothes to change into, but at this point it seemed as if we should just get going before any other mishaps occurred. We did a walk/run to our destination and were so happy to arrive, crisis free.

We ate slowly, enjoying every bite of the delicious meal and every sip of the perfectly paired wine. Mr. Wiz laughingly commented as to how impressed he was that I was able to go with the flow. That reminded me of a past birthday of mine.

When I was 4 years old, JC and my grandmother took me to an amusement park on my special day. Not in agreement with their departure time, I threw myself on the ground, screaming, and made myself stiff as a board, resulting in each of them grabbing my arms and legs in order to get me back on the New York City bus. With her black eyes shining (which sparkled when she was happy and burned a hole into you when she was not), my grandmother recited a poem to me that day (in a combination of English and Spanish) that I never forgot:

There was a little girl
And she had a little curl
Right in the middle of her forehead
And when she was good, she was very, very good
But, when she was bad, she was horrid

I announced that a toast was in order. I may still have that curl, but as I grow older, I strive to find the lighter, more humorous side of life. So, here’s to going with the flow, leaping over those mud puddles and heading wherever its current takes you.

2 thoughts on “When Your Birthday is Not a Mirth Day”