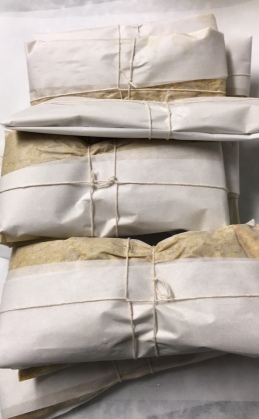 Pasteles and I go way back. They’ve been a part of my life every Christmas that I can remember. Why then, did I have such a complicated relationship with this family ritual?

A traditional Latin American holiday food, a pastele is similar to a tamale. The dough (masa) is usually made with plantains (cooking bananas) and root vegetables (yautia or yucca) and the filling is a mixture of diced pork and spices in a tomato base. Completion is done in assembly line fashion, placing some dough in the center of a piece of parchment paper (sometimes a banana leaf is placed down first). Then, the pork mixture is added on top and the paper is folded, wrapped and tied with string, ready to be boiled and enjoyed.

As a child, I always looked forward to the arrival of the strange looking vegetables. They would not win any veggie beauty contests, all gnarly and odd shaped with what looked like long hairs sticking out of them, and I’d delight in rolling them around the kitchen table and watching my younger brother and sisters scream when they’d come their way. The kitchen was always a buzz, as my Latin grandparents methodically worked all day long, leading the group. With no Cuisinart, a manual grinder that attached to the end of the table was used to grind the meat and the hard vegetables had to be grated manually. My siblings and I were at the end of the assembly line and allowed to place one green olive on each pastele before it was wrapped.

During my teen years, the whole concept of pasteles embarrassed me (but, then again, I was at the stage when anything family related was embarrassing to me). Once, when a friend payed an unexpected visit, I worried that she would think us Gypsies. I once tried unsuccessfully to get out of working the assembly line by sarcastically mentioning that there were child labor laws in New York state, until my grandmother gave me the evil eye (her dark piercing eyes sparkled when she was happy and burned a hole into you when she was not). I quietly went back to work and stopped looking at the clock.

As time went on, my parents took over and the whole process was turned into a party. Family and friends were invited over in the afternoon and guests were greeted with an apron and chef’s hat, then asked to wash their hands and report to the kitchen for their assignments. Latin music played in the background, as wine and hors d’ oeuvres were served to the assembly line workers. The big laugh every year was who would be demoted to string cutting.

As a young woman, I knew that the day would come when I would have to introduce any serious marriage candidate to this atypical way to spend a Sunday afternoon. Not surprisingly, Mr. Wiz* was an eager participant. Even with strong Midwestern roots, he took to the process so naturally that my dad announced happily to all that he must be the lost child of the Count of Monte Cristo, left on a doorstep in Michigan. The crowd all agreed with a rousing toast and I wondered if there was still a New Years’ Eve date in my future.

Things went from bad to worse when, at the end of the afternoon, Mr. Wiz noticed a black stain on the palms of both hands, which soap and water was not washing off. This was due to his willingness to take on the difficult assignment of peeling the hard skin of the plantains off with a knife and then pulling them off with his hands. The crowd tried to alleviate his concern by reminding him that the discoloration would eventually wear off. The problem was that he was flying out in the morning to give a big sales presentation.

Before dinner was served, my grandmother quietly took Mr. Wiz into the bathroom and closed the door. Afraid to interfere, I could see my future changing before my eyes (not for the good). A hush came over the crowd as they exited the bathroom together with Mr. Wiz looking a bit wide-eyed. As he held up his now clean hands, the crowd cheered and more wine was served. No one ever spoke as to what may have occurred, but it was rumored that she scrubbed his hands with a solution of lemon juice and baking soda while whispering a Spanish prayer that would guarantee that he would not leave me for a gringo.

Now, my siblings and I are scattered all over the U.S., but the tradition continues. Here in Texas, our assembly line included a new friend. Ohio reported in that their veggies were already prepared and the process would be starting at 5:32 p.m. that evening; finish time was anyone’s guess. New York decided that they would await their March visit to Texas and partake then.

A word of caution is always shared with a reminder of the dangers of letting the pasteles out of your site, as a family story is retold each year. JC* was dropping off pasteles to a friend. When no one answered the door, she left them outside in a small shopping bag with a red bow on it. She was surprised to find out later that her friend had never received the package, but the friend deduced exactly what had happened. The houses in the development all looked the same and JC had left the package at the wrong door. The residents arrived home and alarmed to find a package with such strange contents, called the police. The bomb squad arrived, inspected the odd khaki colored squares wrapped in paper and declared it a non emergency. The friend received another pastele shipment under the cloak of darkness and a lesson was learned, never to be forgotten.

My tumultuous relationship with pasteles has now matured into a wonderful Christmas tradition that I hold so dear. I dream of my whole family getting together and recreating that assembly line, while the teenagers feign annoyance, the children add the olives and we all toast each other, as the music plays in the background (always just a bit too loud).