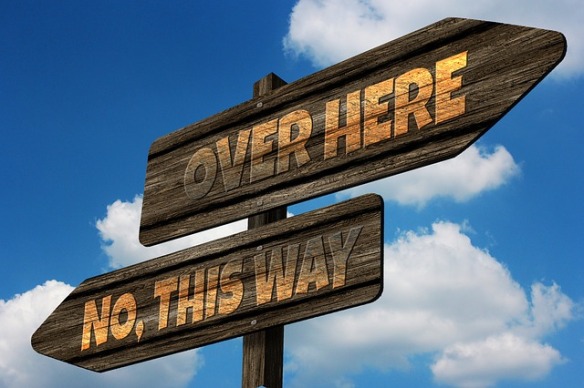 OK, I admit it; I have no sense of direction. While others can logically navigate to and from their destinations, I am always left in a heightened state of panic suffering from topographical disorientation.

I guess that I was just born this way. Sure, from the outside I may seem confident. But, on the inside, some of my brain cells within their networks are miss-firing and not sending out the proper signals that help perform simple wayfinding skills. So, while you are confidently enjoying a walk or drive around new environs, I am either full of anxiety, trying to remember from which direction I came or making sure that I keep close to you, so that I am not lost forever.

I was the baby crawling in the opposite direction from the others at playtime and the reason that my grammar school made children on field trips wear bright red t-shirts. On the first day of junior high, I was sitting in the nurse’s office by fourth period, stressed to the point of stomach pains as I tried to maneuver to classes on three levels before the late bell rang.

To assist me in my daily commute to college in New York City, my Spanish grandmother tried teaching me about the subway system. Legend has it that, as a spirited young girl, she entered down the steps into the dark cavern of the city’s underbelly one day. After getting lost for six hours and without the command of the English language, she emerged unscathed with a working knowledge of the rapid transit system that would impress any conductor. Unfortunately, the knowledge she tried to impart on me was lost. Resigned to the fact that I never would learn the stops on the GG or the EE trains, she took to making the sign of the cross whenever I’d venture out alone.

When your 4-year old son tells you that you made the wrong turn to his play date’s home, it’s time for you to get your bearings. It would be 12 years before he would get his driver’s license, so I had no choice but to begin to keep a journal with directions written out to every location I could think of.

You would think that technology would have solved most of my problems. When Lola and I venture out alone, she does quite a good job of directing me. I have such an intimate relationship with our car’s navigation system that I’ve named her Lola. Together we head out on the open road, with her very authoritative voice instructing me (I swear that I can sense her annoyance when I miss a turn and she has to recalibrate the directions). It’s when Lola doesn’t speak to me that I get concerned. Though I should know by now that until there is a change in the route, she will not communicate, the silence always worries me. And, as I ask out loud why she is quiet and question whether I am still going the right way, I always feel that she is feeling quite smug, knowing just how much I depend on her.

I do have one thing in my favor. Luckily, my very underdeveloped sense of direction which relates to transporting me from place to place has not affected the other type of sense of direction that helps me to have a clear idea of what I want to achieve. Not wanting to always be the passenger and never the driver, I have to remember to just point myself in the right direction and follow my path.