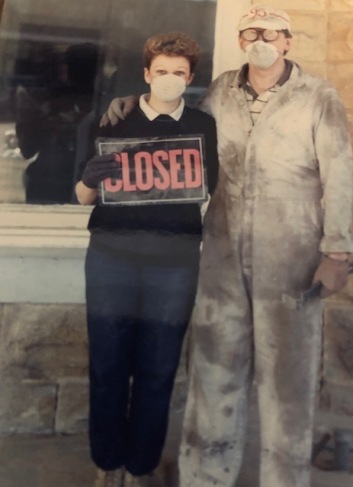 Mountain View, Arkansas, (population: two thousand one hundred forty seven) was not on the way to anywhere else. You must travel into the winding mountains of the Ozarks to get there. The small town with its historic buildings, built of Arkansas stone and clustered around the Courthouse Square appeared to be frozen in time. Yet, there was a pulse and vitality you could feel.

Most every day, you’d hear music; mandolins, fiddles, dulcimers, guitars. It’s a long-standing tradition that musicians gathered anytime, day or night, and played together on the square. Known as the “Folk Music Capital of the World,” Mountain View was home to musical events such as the National Fiddler’s Competition.

My eyes shut tightly, Mr. Wiz* excitedly escorted me out of the car. I opened my eyes to find him standing in front of a large decrepit stone building, as he explained that the almost eight thousand square feet was once home to a car dealership. Since the wood furniture company Mr. Wiz was running was renting it as a warehouse, he wondered what I would think of trying a little experiment.

What if we cleaned up the first floor and displayed some of the wood products to sell during the upcoming festival? Based on the sales, we might consider buying the building and creating a retail store. What the heck; we had already moved there from Chicago and back then, we were ready for an adventure.

We got right to work, scraping off the black paint that covered the front picture windows and sweeping up the dirt and dust. Just as I was worrying what we might do to hide the large holes in the walls, a shy woman peeked in to say that she was looking for a place to display her handmade quilts during the festival. We made a deal, strung them up on clotheslines, put together some samples of the outdoor furniture (porch swings, Adirondack chairs, etc.) and were open for business.

The three-day Bean Festival brought over fifty thousand visitors to the little town to enjoy the famous outhouse parade, to taste the beans simmering in the big black cauldrons over an open fire in order to judge the best recipe and to play music on the courthouse square. Our cash and carry experiment was an overwhelming success and soon after, we became the proud owners of the O.R. Case building.

Built in 1928, we were excited to return this National Historic Register building to its original glory days. Even the old dust and dirt that stuck to our clothes, as we did some prep work before the construction crew started, couldn’t dampen our spirits.

It is said that because Arkansas rests on diamond mines there is a mystical aura around it. This not only explained the quilter showing up at just at the right time, but also a continuing series of events that to this day, still has me scratching my head in disbelief.